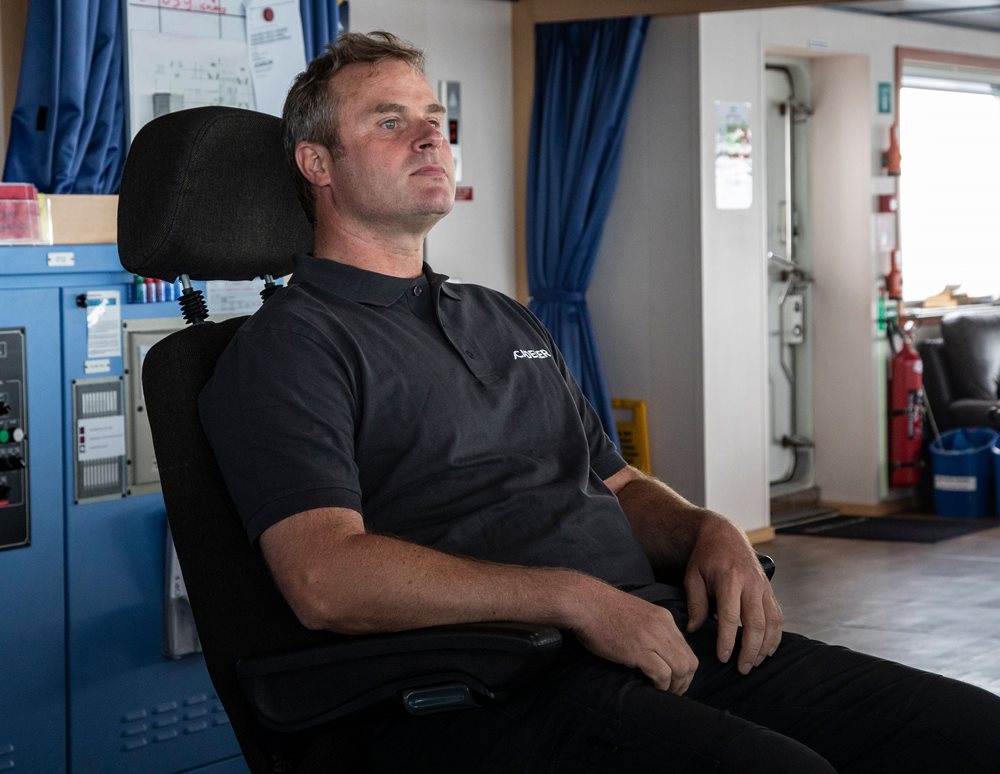 Jens Rohn is Master of Wind Osprey and has been working in the company offshore since August 2013.  Jens brings positive energy, strong navigational experience and technical knowledge on board. He was also the Master on board during the installation of Wind Osprey’s new boom.

What do you do as Master of Wind Osprey?

As Master, I act as a mediator, adviser and decision maker depending on the situation.

From my perspective, communication is the first crucial skill for running a vessel, especially one with a large number of crew members with shifts spread across all hours of the day. I have to keep my eyes and ears open all the time. Being responsible for the safety of the vessel and wellbeing of all personnel on board. I must support them when needed and notice if a crew member is unfocused, as it could impact the overall functioning of the vessel.

I also make sure we have good communication with the clients and that the possibility for discussion remains open. I represent our company, but more importantly, I make sure things are working smoothly and that our clients can gain the full benefit from a well-maintained vessel and a crew focused on safe operations.

Then, of course, being Master is also about monitoring and maintaining adherence to the legislation and procedures from authorities, as well as the vessel owner and keeping up with the client’s method statements. The Master must also supervise operations on board; Cadeler is fortunate to have competent officers and crew running the vessels, making this task much easier.

Tell us about your background?

I grew up in Kiel, Germany on the edge of the Baltic Sea and did all kind of water sports, but mostly sailing. Being triumphant in sailing competitions, namely dinghy, inshore and offshore races, I decided to work in shipping, specifically ‘commercial sailing’. I started studying in a ship mechanic program to become Fitter/Able Seaman. Subsequently, I decided to continue with the education to become a Navigator. To do so, I went to college and earned a diploma which I followed up by attending a university of applied sciences to study a Master of Science in Nautical Science, Business & Engineering.

I started offshore working on a project cargo vessel, delivering oversized and special cargo like locomotives, boilers and tug boats worldwide. Then, I spent two years circumnavigating the globe on container ships up to 350 m length. After that, I decided to develop a specialty and went into the offshore business, where I started on a platform supply vessel, moved to diving support, and performed freelance work in the offshore wind sector. My specialty with jack-up units began to emerge when I started in another company as an assistant during the development and commissioning phases for two new build DP-jack-up vessels in South Korea. Following delivery, I worked onboard and installed windfarm foundations and turbines in European waters. After that, I took part in the conversion of a towed jack-up barge to a self-propelled jack-up vessel within a company operating three other jack-up units.

In August 2013, I found a job ad for a vacant position requiring experience in jacking operations and dynamic positioning. A couple of days later, I joined Pacific Orca in Belfast, as Chief Officer for the West of Duddon Sands project. I transferred to Wind Osprey after being promoted to Senior Chief Officer and later, as Master.

What skills are needed for being a good Master on such a complex vessel?

I think having general shipping experience, no matter the rank, is a real asset. Our vessels are very special and have specific requirements, but if you have a deep knowledge of shipping, like sailing worldwide in deep waters, that is an advantage which prepares you for handling unforeseeable situations.

Being the Master on such a vessel also requires technical understanding because a windfarm installation vessel is far from being a normal ship, and the Master must supervise all processes which contribute to the overall functioning of the ship.

What aspects of the job do you enjoy the most?

I am a technical guy and like the complexity of the vessel and the challenge of managing all the specialised equipment: the cranes as well as the jacking and positioning systems. Also, every project comes with its own innovations; it is interesting to see the implementation of new technical inventions or engineering developments.

Over the years, I have seen the components getting bigger and bigger. When I started on Wind Osprey, we were about to install the Siemens 3.6 MW turbines with a rotor diameter of 120 m. In our coming projects we are talking about 15MW turbines with a rotor diameter in excess of 220 m. In a relatively short time period, the dimensions of the wind turbines have become supersized. When I entered offshore wind installation, we put up towers in sections, nowadays we do it in one piece. Who knows? We might get back to installing turbines in sections, but much larger ones, and utilise supply vessels to deliver components offshore while a vessel with an even longer crane installs them. It will be exciting to see how the market develops.

I also particularly enjoy being involved in early planning or project tender meetings. There is a real opportunity to share my expertise and knowledge with our clients, from the earliest stage, to improve vessel operations and ensure a smooth and safe project completion.

What are the challenges you must deal with during operations?

In operations, everything depends on the weather. In good weather conditions, everyone is happy, but when the weather take a turn for the worse, the Master must take a decision on whether the conditions are workable or not. If you are straight forward and keep everyone in the loop, you win approval from all parties. Of course, we all want the project to be completed within the best schedule and conditions possible, but there are limits we cannot cross. Sometimes, it can be delicate to tell the project team that we must stop the job for different reasons, but it is necessary to ensure safety of the asset, crew and project equipment.

What do you enjoy while being offshore?

I like to go offshore for the people, for the team, for the professionals and for the technical challenges.

I really like that I always get to work with the same crew. It enables us to achieve a lot more, as we can trust and rely on each other. I also enjoy navigating. While at sea, you can enjoy the nature, and you know where you have come from. When you jump on a plane to spend the weekend somewhere, the world seems so small because you move fast. Navigating the oceans forces you to slow down. When you are crossing the Pacific, full steam ahead without seeing the shore or anything for 20 days, you realise how big the planet is and how little you are. It reminds us to do our best to preserve resources and value the planet.

We also have a lot of funny moments and jokes on board! It is good to laugh as it can be tense when things are not going in the right direction or must be done within tight deadlines. Our projects require teamwork, and everybody should pull the rope in the same direction in order to achieve our goals. I try to do my best to create a good harmony on board, but it is hard for me: Germans are not famous for making jokes. (laughs)

I have many good memories. While we were driving the last monopile with the pile hammer at West of Duddon Sands, music was playing on the radio. Michael Jackson was singing Beat It, and the beat was exactly in sync with the pounding of the hammer. I transmitted it to all the communication channels on the vessel, so everybody could enjoy it. That was fun! Another notable moment occurred last year. Our ISPS security drill fell on Easter, but instead of a bomb search, we had to search for ‘suspected objects’ and the crew found… chocolate Easter bunnies!

What kept you busy during Wind Osprey’s new boom design, construction and installation?

After the incident, we submitted ideas and requests for improvement of operations to the teams working on the new design. It was a strange situation, as at the time, no one knew the exact design and dimensions of the upcoming turbines. Our office had to take decisions based on predictions.

Throughout the time the boom was being designed and built, we were kept busy with repairs, maintenance and modifications on board. We had the goal of getting the vessel back to operational condition, and every action was a step towards a return to normal ship operations. It was our driving force, our mission to accomplish. As long as we had that in focus, everything was going well. We also had a good attitude towards the situation, along with a fantastic crew and superb food on board.

The boom installation took place during the Covid-19 lockdown. Even though we had to extend our usual trip length on board, we were lucky that our families at home remained healthy and we were able continue focusing on our work. In general, it is very important that everyone has family support. When all goes well at home, all goes well on board because it is easier to remain focused on work. With the successful completion and commissioning of our new extended crane boom, we are ready to get back to the operations this vessel was built for – it feels like a rebirth.

I am looking forward to a future full of smooth, efficient and safe operations.

Project Engineer Office
I am a ‘curious engineer’ at heart, and I always strive to be solution oriented. Meet Willemijn Botman

Electro-technical Officer on Wind Orca installation vessel Vessel crew
As an ETO, we are always in high demand, constantly being radioed for assistance and when faults occur it's of paramount importance to be able to avoid downtime. Meet Matthew Offredy

Senior Project Engineer Office
The continuously increasing turbine sizes pushes the technical requirements for vessels, and as an engineer I need to find the ideal solutions to ensure the best vessel capabilities. Meet Rasmus Panton

Head of HSEQ Office
“Safety is not just about compliance, it’s also about being proactive and constantly looking for improvements” Meet Bo Lauridsen

Project Engineer Office
“I am grateful to be able to take part in offshore windfarm installation and act for a more sustainable future." Meet Can Mollaibrahimoglu
View all

Join Cadeler and become part of an international company with a diverse and agile team who is constantly seeking to contribute to making the world a better place. So, come and take part in the transition journey towards clean energy. We have an open and informal working environment, and we like to welcome new colleagues with open arms, as we believe that everyone can make a difference. At Cadeler you will be able to make an impact, as we offer a workplace that empowers and gives opportunities for development – both on a personal as well as on a professional level.