The new workshop will enable SGRE’s Heavy Lift team to repair various types of SGRE nacelles directly at the offshore locations. This new system makes the repair process much faster, as it prevents the need for trips between the offshore sites and the port for repair of nacelles onshore. This option is also expected to reduce fuel consumption and, therefore, improve the sustainability of the operations.

The structure of the workshop had to be lifted on to Pacific Orca with great care because of its large windage area. The workshop is now bolted to the deck and ready for operations.

The workshop is 10 metres high, 13 metres wide and 30 metres long and weighs 58 tonnes. It has a retractable roof which opens to allow placement of the nacelle inside for repairs, providing SGRE’s team with a workspace that is completely protected from the weather conditions offshore. The workshop was originally designed by OSK for SGRE, and SBO’s engineers have ensured that it is now properly secured to the vessel and will remain stable on Pacific Orca’s deck, especially during rough weather conditions. SBO’s HSEQ team has ensured that it complies with the safety requirements on board.

“We are glad that we can safely accommodate the workshop on Pacific Orca as it will improve the efficiency of operations. Beyond that, it increases the flexibility of Pacific Orca as a maintenance and service tool. Now, SGRE can repair nacelles directly on site,” says Ulf Gjendal, Head of Projects, SBO. “Luckily, we managed to find a good timing for the installation and we cooperated well with SGRE to ensure a smooth mobilisation,” he adds.

“In SGRE we are always in pursuit to optimize time when the vessel is at the wind farm, to minimize down time for the turbine and loss of revenue for our customers. Together with SBO we managed to take advantage of a weather standby period and install the workshop – one team spirit and job well done,” says Jacob Ib, Senior Marine Operations Manager, SGRE. 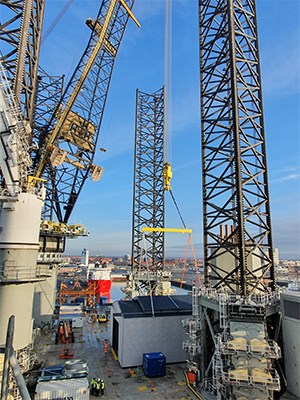 The installation of a mobile workshop on Pacific Orca’s deck will enable SGRE’s Heavy Lift team to repair various types of SGRE nacelles directly at the offshore locations. 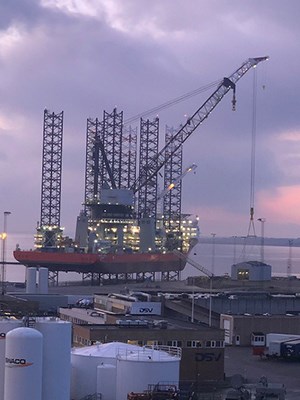 View fo the workshop being installed onboard Pacific Orca taken from Pacific Osprey in the Port of Esbjerg.