Last Sunday, it was possible to watch Pacific Orca from the coast while she sailed down the Sound (Øresund), the strait which forms the border between Denmark and Sweden, and passed Copenhagen. She was heading to Wikinger Offshore Windfarm for service and maintenance work – which is also her premiere in the Baltic Sea.

Pacific Orca left the port of Esbjerg at noon Friday heading towards Wikinger Offshore Windfarm, in the German Sea, for the ongoing maintenance and service agreement with SGRE. On the way, she passed through the Øresund, sailing down from Elsinore (Helsingør) and off the coast of Copenhagen. The day proved to be a great opportunity to gain a clear view from the shore occurred when the sun dispersed the fog off the coast of Copenhagen (see main image), and the Øresund Bridge forced her to sail rather close to the land. Some of us at SBO – and maybe some of you – went to see her and managed to take a few nice shots.

Pacific Orca has now started maintenance work at Wikinger Offshore Windfarm. While she is in the Baltic, she is scheduled to visit the Port of Mukran, northern coast of Germany. Once she has completed her work, Pacific Orca will return to Esbjerg to prepare for her next task which are likely to occur off the coast of UK.

"So far, the maintenance and service project has been progressing as planned. It’s exciting to be going to new places like we are now in regards to the Baltic and the Wikinger Offshore Windfarm. It was surely a joy to see her passing through Øresund. Our current focus is ongoing operations and to prepare for her next assignment which will bring her back into the North Sea," says SBO Project Manager, Peter Kyhl. 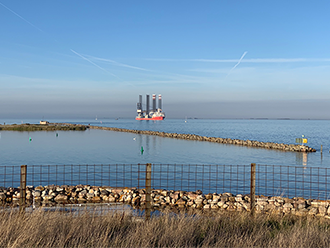 Pacific Orca sailing down the Øresund towards Wikinger Offshore Windfarm, in the German Sea – which is also her premiere in the Baltic Sea.